Quote of the day

You can't milk a cow with your hands in your pants.

Admiral Freebee
Posted by Positiviteit.be at 12:09 PM No comments:

Stop killing these great ideas, they are your future !

One day, Peter was attending a meeting in his company. His boss was giving a speech about the need for change to turn around the negative financial situation of the company. As a "good" manager he asked the audience to bring in great ideas that could help.
Peter came up with an idea that didn't need big investments, but ... even before he finished his ideas, the idea was killed by his boss as being 'not realistic'.

Does this sound familiar to you ?

Greatest ideas often start with a strange twist in our mind. And when we persist, the idea can grow and become a success. We need people to give it a chance.

Don't kill creativity and ideas before they are born. Listen to your colleagues and give it a chance. 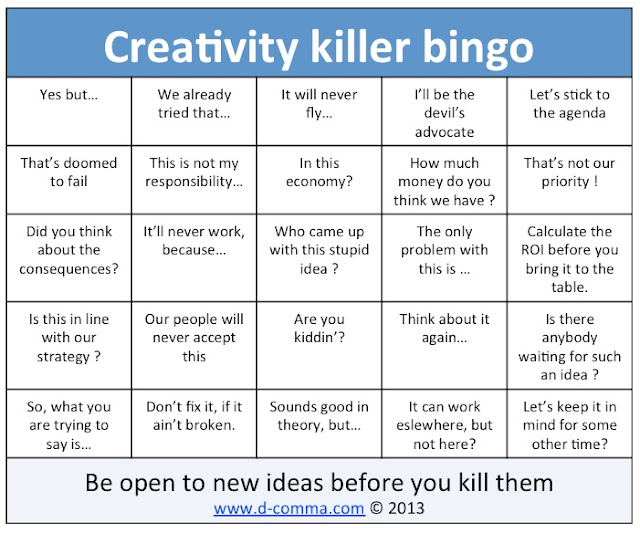 Posted by Positiviteit.be at 9:22 AM No comments: 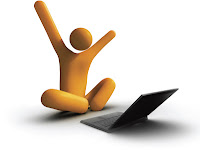 Learning has always been a stressful activity. We had to have high grades. We had to struggle ourselves through piles of books and information. If we didn't do it right, we FAILED. Our parents were upset, later on, our bosses didn't give us challenging projects or promotions, because we FAILED.
I've never been the best student and suffered a lot because of stress for my exams. Despite all the difficulties with the stuff I had to learn for school and university, I had no problem at all to learn a recording of my favorite comedians by heart. I had to listen to it once or twice and - even until today - I can repeat a lot of these recording.
How comes I had difficulties to learn one thing, and had no difficulty to learn the other ?
The reason lies within our brain.
Frazzle is neural condition during which the prefrontal cortex (the executive center of our brain) is blocked by emotional influences like fear and anger. In this condition we have difficulties to concentrate or even think clear. Remember the famous "black out" during an exam. The executive center of our brain is hijacked by the amygdala.
Opposite to this rather negative situation, the prefrontal cortex can also be stimulated by emotions of happiness, fun, joy. When we feel ourselves in such a condition, we learn faster, we are more creative...

From theory to real life

Posted by Positiviteit.be at 3:18 PM No comments:

Living life at the speed of light

Let me straighten this out. YOU HAVE TIME !

We can make choices. What will we do with our lives ? Do you want to invest time in being bussy at work ? Do you want to invest time with your kids ? Do you want to go camping with friends ? Do you simply want to go to the movies ? All choices are right, there are no "wrong" choices. But don't complain about all the things your neighbor achieved. Perhaps he made a choice to work hard, start his own company. Perhaps he has the best relationship with his family and kids, while you are talking with a lawyer to get your third divorce arranged because you were too much focused on you work and not your family.

Look at this great movie and think about it.

My story
Two years ago I gave up a well paid job with plenty of security and the complete salary package. I decided to chase my dream and start my own company. Ever since I had great moments, I've met very interesting people and smiled a lot. I had the opportunity to work on projects I really believed in. It was not a pic-nic in the park. It was difficult to start up a training company in a competitive market in times of crisis but I believed in it and did it. My bank account looked like a rollercoaster (up and down :-) )
I had time to start a blog about cooking with my kids (http://kokenmetkinderen.blogspot.com) (only in Dutch - sorry folks). I travelled the world.
I made a choice and jumped. You can do it as well. I don't say you have to take the same decision as I did. I say you have to dream and live up to it. This my friends, is the key to success and happiness.

My advise
Make choices. Follow your heart. Don't look back too often to complain about the bad decisions you made. Remember the great moments in your life. Believe in what you do. Build your life - every day. Or with the words of late Stephen Covey : Live a life and leave a legacy.

Posted by Positiviteit.be at 6:10 PM No comments: 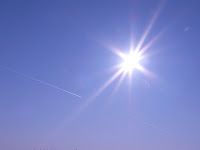 You wake up, open the curtains and what do you see ? A clear blue sky and a beautiful sunshine ! A big smile on your face is the next step to a fantastic day. Nothing can stop your happiness.

Somewhere in the afternoon a small cloud appears in the sky. What will you do ? Keep on enjoying the sun or start complaining about the possibility the weather might change and rain might fall. I hope you'll choose for option 1.

In business life I sometimes observe the same. When everything is going well, people are happy. But the minute one thing is not going their way, some people start complaining. They complain about the company, the bosses, bad communication top-down, low salary, ... They focus on the "bad" things and create negative energy. Indeed, that one cloud could move in front of the sun, but it's only a very slim chance that might happen.

My advise
Focus on good things. This attitude will create a lot of positive energy. Keep an eye on bad things, but your focus should be with the good vibes. It will make you happier, you will be more easily in flow and  energized.

Posted by Positiviteit.be at 2:42 PM No comments:

Yes you can ! Enlarge your circle of influence. 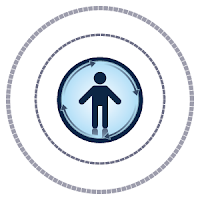 The difference between daydreaming and success is ACTION. To achieve something, you need to know the what and how of achieving your goal. But more important you'll need to take action.
Too often I see people complaining about the fact they don't have enough responsibility to achieve things.

NO ! That's not true! Really successful people don't wait until somebody gives them the proper responsibility, they simply grab it and go for it. 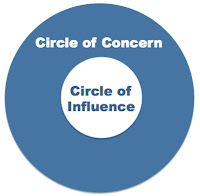 What did they do ? They didn't wait until somebody gave them responsibility. They created circumstances to stand up. They decided to make a difference. They started with themselves.

Back to your life.
If we are prevented from achieving our goals, we blame circumstances in our circle of concern (sometimes even before we took any action). My question to you in that case : " did you really do everything you can to make things happen ? "

Remember
You'll need both "vision" and "action" to enlarge your circle of influence. First think, then take the action and believe in yourself.

The right words to get the message across

Words make the message. If you want to get a message across it is important to carefully choose the right words. Whether you need to convince your boss, an employee, a customer or your partner at home, the right words can make or break the message.

This movie illustrates the impact of using the right words to create more impact.


Made to stick
In their best selling management novel "Made to stick", Dan & Chip Heat give 6 simple tricks to improve your message. These "S.U.C.C.E.S." tricks work especially well for longer messages like speeches, trainings, ...
My advise to you :


Posted by Positiviteit.be at 5:26 PM No comments: 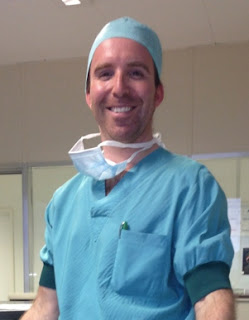 Over the last 15 years I've been working in Learning & Development both as internal and as consultant/trainer. The most interesting moments were those moments when I was in close contact with operational business. Through these interactions I got a better understanding of business, of challenges, of daily life, instead of staying in an office somewhere far far away from the action, like many of my colleagues.

This attitude helped me to grow faster and get connected to people in operational activities and allign learning paths better with their goals.

Through this, I worked in factories, drove straddle carriers to pick up containers, ... and learned to speak the language of the business.

Recently I had a very interesting day with one of my customers. Since a few months I've been working on a project in the surgery department of a hospital in Belgium. They asked me to help them improve the communication and interaction in their surgery department. I loved this challenge, because I am very interested in the interaction between nurses, surgeons and anesthetists. Last week they gave me the opportunity to join them for a day and observe the interactions during surgery. I attended a hip surgery, a few eye surgeries and a stomach removal (and I didn't faint :-) ). Despite the fact that I started really early in the morning (5.30), I was full of energy in the evening. Why ? I learned a lot, felt gratitude because I was interested in what they were doing, ... These moments are priceless.

My advise to you...
If you are working in a supportive function (IT, HR, Communications, ...) or you are working as a consultant, try to work with operational departments for a while. Invest some time to get to know them better. This will help you in the short run to get a better understanding of the organization you're working in and will give you more credibility.

Invest time in getting to know your customer. It is a great investment of time.

Posted by Positiviteit.be at 6:39 PM No comments:

Do you live in the past or the future ?

I'm often asked to mediate between colleagues who have an argument or even a conflict. Based on my experiences, I distinguish 2 types of people :


I believe the first group op people live in the past. They invest all their energy in something they can't / don't want to change. They are focused on blaming, right/wrong, ... without moving on. They often create quite a lot of collateral damage, without necessarily contributing to long lasting solutions. They create negative energy.

The second group op people build the future. They use the past to see where something went wrong and use this knowledge to learn and be better in the future. They forgive and move on. They create more positive energy and grow.

Are you group 1 or group 2 person ?  It is a personal life-choice. You decide who you want to be !
Posted by Positiviteit.be at 10:17 AM No comments:

FInd out more on D-Comma